The foundations for today’s Ronald Searle Archive in the Wilhelm Busch Museum were laid in 1996. The patron Rudolf Ensmann provided the Museum with the funding to exhibit 40 drawings from the artist’s personal collection of historical caricatures at the great Ronald Searle Retrospective of that year. In 1998, with the help of the DePfa Deutsche Pfandbriefbank AG in Wiesbaden, the Museum succeeded in acquiring the second part of the historical collection as well as the large special library devoted to the history and theory of caricature.

The origin of the historical Searle Collection is closely tied to the artist’s biography. One year after his return from a Japanese prisoner-of-war camp, Ronald Searle bought a drawing attributed to Annibale Carracci for £60 – quite a large sum at the time for a young artist. The sum was especially significant, however, for £60 was precisely the amount that the British state had granted to Searle as “compensation” for three and a half years of wartime captivity – and he decided that buying the Carracci was the best way to spend it. But it did not stop with this item. Over the next years and decades Searle systematically purchased rare ink drawings and watercolours by the great, and mostly English, caricaturists he most admired, such as H. W. Bunbury, James Gillray and Richard Newton. Searle was especially fascinated by George Cruikshank and acquired not only drawings and numerous sketches but also a wealth of material on his life and work, including a large number of letters that Cruikshank wrote and received. Searle was meanwhile accumulating a library dedicated to the history and theory of caricature. Beginning with such valuable incunabula of caricature theory as A Book of Caricaturas, on Sixty Copper-Plates, with ye Principles of Designing, in that Droll & pleasing manner by Mary Darly, published in 1762, the library contained every important standard work of theory concerning caricature. The library collection is richly enhanced with satirical magazines from the early 19th century with fold-out caricature prints, with much literature, some of it rare, about historical caricaturists mostly associated with the English illustrated book, with first editions, and with standard works on the art of illustration.

The Searle Collection and the personal archive

Simultaneously with the 1998 purchase of the Monica and Ronald Searle Library, the Museum received from the artist an initial gift of 18 drawings, including one from his St. Trinian’s series about an English girls’ boarding school full of rebellious schoolgirls, which Ronald Searle had made famous in England during the post-war years. Searle’s creativity goes far beyond St. Trinian’s, however. As well as comic drawings, his oeuvre includes political caricatures, designs for coins, cartoon films, and painting in the widest sense, a large proportion of which the Wilhelm Busch Museum either owns or has on permanent loan.

In the course of the 2001 Searle & Searle exhibition, the Wilhelm Busch Museum was honoured with the gift of a veritable treasure: the first part of Ronald Searle’s personal archive, containing not only correspondence with publishers, artists, and museums but also numerous sketches and drawings, including the very first St. Trinian’s drawing. 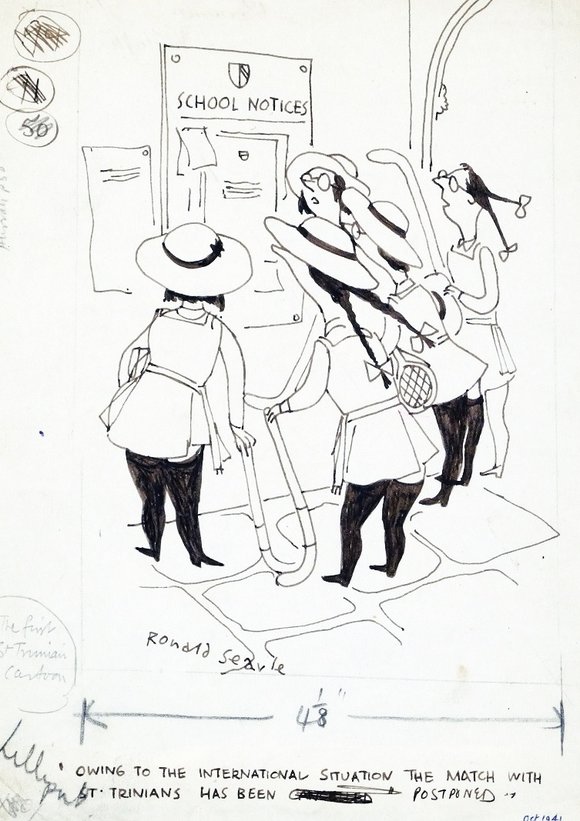 Ronald Searle’s pre-death legacy, which was to be left to the Wilhelm Busch Museum on permanent loan to be made accessible for study and organized for museum exhibition, was purchased in 2010, one year before Searle’s death, by the Stiftung Niedersachsen with the help of the State of Lower Saxony, the Kulturbüro of the State capital, Hannover, the Kulturstiftung der Länder, the VGH Versicherungen, the VGH-Stiftung, the Nord/LB Hannover, the Sparkasse Hannover and the Niedersächsischen Sparkassenstiftung. This was a spectacular coup, consisting of 41 boxes with over 2,100 drawings and sketch books from every period of Searle’s creative life, as well as documents and other items connected with his life and work. Amongst all this were drawings of the trial of Adolf Eichmann in 1961, which Ronald Searle observed for the American Life magazine. 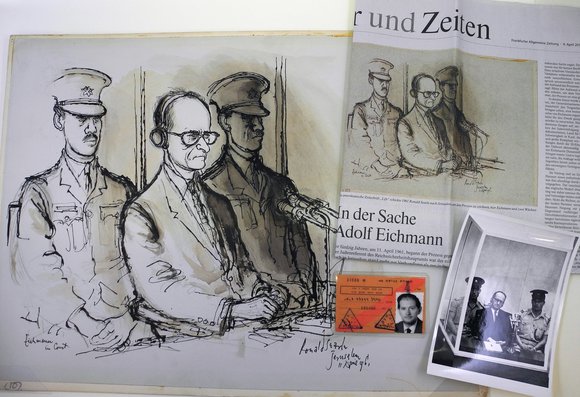 After Searle’s death in 2011, the material on permanent loan was augmented in 2012 with the second part of the personal archive: more than 60 boxes and folders filled with letters, documents related to book publications, more literature about caricature, drawing equipment, and posters.

The Ronald Searle Archive is available to researchers and other interested people by prior appointment.